Remy Alexander - the book of Eva 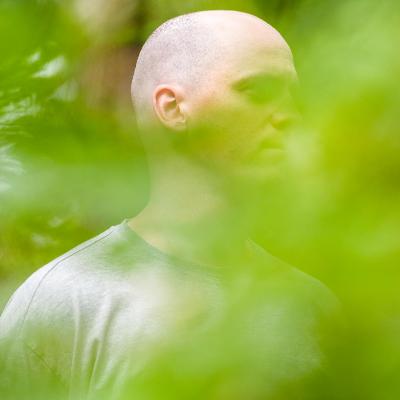 "When Konstantyn approached me for a new piece; i was immediately enthusiastic about the prospect of working together! We had a meeting and formed a bunch of plans. It was going to be a piece in three parts, totalling about 30 minutes. When i spoke to artist and instrument-maker Rob van den Broek about a possible collaboration for the future; I asked him if we could bring the future to this moment and if he could make a new percussion instrument for one of the parts of the composition I was to write for Konstantyn.  Rob being himself, immediately started drawing out sketches and forming ideas. The initial idea was for the percussionist to be encapsulated in a really big instrument; through workshopping and discussing the idea together with Konstantyn, we finally landed on the idea for EVA; a new percussion instrument and art object with multiple layers and possibilities. The instrument ended up inspiring the entire cycle of three parts. I decided to pair the new instrument with a combination of tape and Marimba, Vibraphone and various other percussion instruments to shape the sonic environment of this composition. The tape of all the parts exist most of the sound of EVA, bent in all kinds of ways to take on different shapes, sizes and textures.
The whole cycle of three movements is, in the composer's mind, called ‘the book of Eva’.

I sand sketch
The first movement is written for marimba, vibraphone, pedal-operated kick+snare and tape. The piece reflects on protesters. Where a crowd is first incited to rise up in angry rebellion, is first relieved and then saddened and angered again; cyclic defiance. Within each of us, screams and whispers may happen simultaneously. The tape chops up a recording of a Ukrainian protest and mixes it with sounds recorded from the instrument EVA and aesthetics of various kinds of club music; reflecting the environment of the protester. Centring our thoughts on the personal meanings of the individuals, not the collective of the gathering of them.

II dew drawings
The second piece is for vibraphone, tiger gongs and tape. It’s a song.
Dance until your feet have trampled themselves
into some sort of unpleasant ecstasy, we know very little of
i mean, would you let light, air, maybe a nightmare,
into your home if you’d know?
Dance in the light of the city, the farmyard and the forest.
Dance during the poverty, pain, suffering and sickness of
anyone, always someone, somewhere.
Dance as if you want it to rain.
And with that vista
of a distant dust cloud full of horses;
dance until the inevitable rumbling.
And then, one day;
Suddenly give up.

III. EVA
In the aptly named third movement, the instrument EVA is finally allowed to fully shine. As the centrepiece instrument for this part; the interplay between what is heard on tape and what is being played live is driven to a new level. The instrument is at the centre of the sound at all times, with all the sounds in the tape stemming from EVA.
The piece treats the instrument as an art object that is suddenly discovered and immediately explored through a ritualistic playing session. The various stages of the instrument's shape and form dictate the music. And i swear. This one time; i came into the room and it levitated! It was off the ground! Not by much.. but still. it levitated."